Colourist Greg Fisher at Company 3 in London worked closely with cinematographer Newton Thomas Sigel, ASC, on Bohemian Rhapsody, from film prep through to delivery. Sigel shot with a variety of formats — some 35mm film, ARRI’s standard size sensor Alexa SXT and then Alexa 65 with the 65mm imager — for later portions of the film, from when the band explodes on the pop music scene, through lead singer Freddy Mercury’s (Rami Malek) illness and death. Sigel, who always is fascinated by the post aspect of image creation, worked with Fisher designing LUTs that could be used on set, to allow all department heads to see their work in a similar space as the final.

Sigel envisioned two overall LUTs to begin with, Fisher recalls. “Colour in the film goes on a journey just as the characters do,” says Fisher, “The earlier part looks somewhat like a film print and then then the look ‘cleans up’ as it gets into their most successful period.”

The more filmic portion, he elaborates, “was not true film emulation LUT. It was opened up; the black level is not raised to ‘film black,’ it is actually black, which instantly gives you more contrast without having to stretch the image out. If we’d actually had to use a film LUT a lot of the punchier colours in the 80s costumes would have been too constrained. We wouldn’t have had as much separation between blues and cyans or reds and orange- and yellowish reds.” 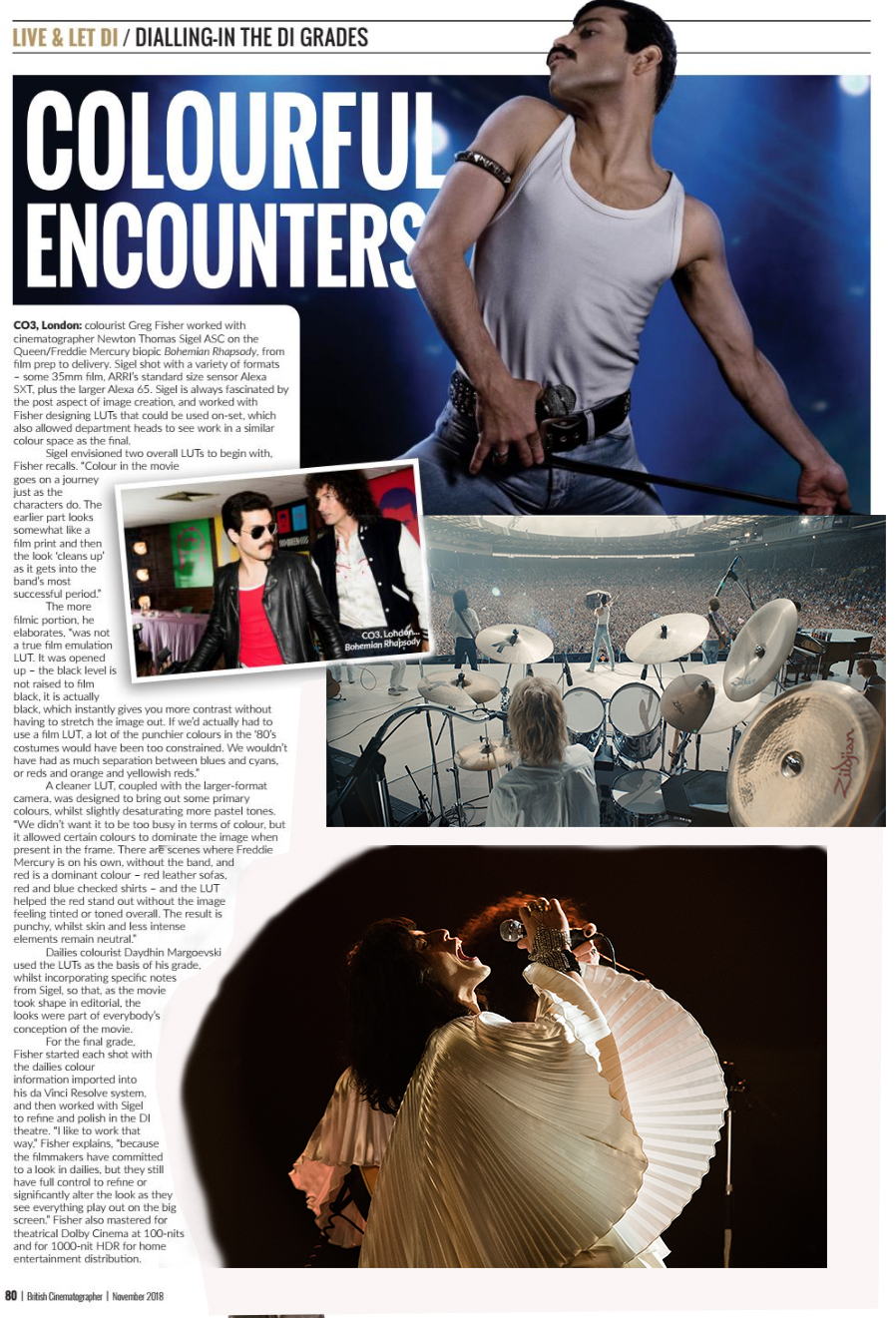 A cleaner LUT, coupled with the larger-format camera, was designed to bring out some primary colours, while slightly desaturating more pastel tones. “We didn’t want it to be too busy in terms of colour, but it allowed certain colours to dominate the image when present in the frame. There are scenes where Freddy Mercury is on his own, without the band, and red is a dominant colour — red leather sofas, red and blue checked shirts — and the LUT helps the red stand out without the image feeling tinted or toned overall. So there result is punchy, strong primary colours punching through, while skin and less intense elements remain neutral.”

Dailies colourist Doychin Margoevski used the LUTs as a basis of his grade, while incorporating any specific notes from Sigel, so as the film took shape in editorial, the looks were part of everybody’s conception of the film.

For the final grade, Fisher started each shot with the dailies colour information imported into his (Blackmagic Design) DaVinci Resolve system, and then work with Sigel to refine and polish in the DI theater. “I like to work that way,” the colourist explains, “because the filmmakers have committed to a look in dailies but then still have full control to refine or significantly alter the look in the final film as they see everything play out on the big screen.” Fisher also mastered for theatrical Dolby Cinema at 100 nits and for 1000-nit HDR for home entertainment distribution.

To read the rest about cinematographer Newton Thomas Sigel’s approach to all facets of the production, you can subscribe to British Cinematographer here.